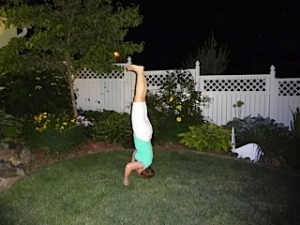 OM
Namah Shivaya Gurave
I offer myself to the Light, the Auspicious One,
Who is the True Teacher within and without,
Saccidananda Murtaye
Who assumes the forms of Reality, Consciousness and Bliss,
Nisprapancaya Shantaya
Who is never absent and is full of peace,
Niralambaya Tejase
Independent in existence, the vital essence of illumination
OM- The Anusara invocation done at the beginning of a yoga class

It was 1976 and I thought I would be an English teacher, a social worker or a professional dancer so I sought out classes in each as an undergraduate at Arizona State University. The dance classes were filled but my eye caught a listing for something unusual: yoga. I signed up and went to my first yoga class at the ASU gym.

That choice has led to a life long passion.  Yoga has been, and continues to be, one of the constants in my life. It’s a touchstone throughout my ups and downs; a connection to my life in a way second only to my faith.

I have taken hundreds of classes in every kind of yoga in cities all around the country.  When I traveled to France a few years ago I was unable to find time to fulfill one of my life’s dreams: to take a yoga class in France, in French.  That is still one of the top three of my bucket list.

In the old days I could only find “gym yoga,”which is sort of like drinking wine out of the box when you know there is  a bottle of the good stuff out there somewhere.  Later, as yoga studios popped up, I’d catch some great classes when I was out of town on pleasure or business trips. Often I’d take my yoga clothes to mediations with me and grab a taxi across town to a yoga class I’d found with the help of the hotel concierge. When I was working for several months in California, I had my favorite studios between LA and San Diego, many close to the ocean.

I loved learning the names of the poses in Sanskrit and some classes had music. The music of Deva Premal or Krishna Das touched me deeply. Some instructors played a harmonium, which is a small pump organ. In some classes we would also chant.

When my dad was a hospice patient in my Arizona home for 7 months as he fought his last illness, the yoga was the medicine I took as I administered his.  Slipping out of the house with the hospice volunteer holding down the fort, I’d go to my favorite yoga studio.  Each day brought a different type of yoga.  There was Anusara the body alignment yoga; Ashtanga the physically demanding yoga; Vinyasa or flowing yoga; and Yin where we held poses for what seemed like hours while our bodies melted more deeply into the posture with each breath.

Back then, Anjie was my favorite teacher. She was beautiful, kind and gentle.  When she would offer a chance to move deeper by gently touching my back while I was in a seated forward fold, I could feel her energy and warmth being infused into my spine by telekenisis through her hands.

Debra, a classmate at this regular gathering of yogis and yoginis, went off to yoga training and rose from our ranks to lead us.  Her classes and music were sensual, and when she spoke in Sanskrit her voice was slow and luscious and as your body flowed to her instructions you felt beautiful, sexy and alive.

Over time Debra changed her name to D-heart (symbol), a move reminiscent of “the artist formerly known as Prince.” She paid extra attention to a young studley yogi who was one of the more bendy and supple men I have ever seen in a yoga class. Watching them side by side, moving through a vinyasa in perfect synchronicity, is indelibly etched in my mind in the same manner as a painting I once saw at the Louvre.

I was entranced with all of it: Anjie, D-heart, supple yoga man, the yin yogini who could lay in a twist over a yoga brick  and put her head on the floor and stay there until monsoon season. Yoga served as the escape from my life, my problems, the bedside care of my father and the loneliness of raising my three children while their father traveled 5 days a week with his work.

At the conclusion of every yoga class we lay on our backs in savasana, the corpse pose where the yoga you have done sinks into the marrow. Later, when FP came on the scene, I’d lay in savasana sending invisible gratitude balloons up to God.  I’d thank Him for that post asana life pulsing through every crevice of my body and for the love for my man that was shooting straight out of my heart 24/7.

After the divorce from FP, I switched to hot yoga and enjoyed being in the dark, hoping all of my sadness could be left in the puddle of sweat at my feet at the end of the practice. Tears are easily disguised amidst perspiration and tears flowed as my  body released memories and hurts stored inside it. Sadly the hot yoga teacher turned things into a yoga/exercise boot camp as the 20somethings in class joked about sweating out weekend booze.  I cringed, realizing the essence of yoga was lost on all of them.

Awhile ago, the founder of Anusara yoga was accused of ethical misconduct.  The yogi Bikram who originated a series of poses in a particular order tried to (unsuccessfully) copyright them and was accused of sexually harassing his students.  Suddenly in looking for yoga as my constant it seemed to be mimicking the rest of the world:  lost, moving away from the sacred and turning instead to exploitation and big business, drifting from what I had experienced for over 35 years as a practitioner.

Now, I continue to practice yoga regularly. I’m  content at my current studio where the beautiful owner leads many of the classes and the instructors that support her are loving and generous spirits.  On this past summer solstice I did the yoga tradition of 108 sun salutations and when I laid on my mat at the end, drenched in sweat and happy with the accomplishment, I found that the lesson that bubbled up was humility.  It’s just like yoga to surprise me with the lessons I least expect.

When I am asked to “go inside” I often close my eyes and flash through the list of those in my yoga story.  Anjie who I am told married a widower with young children and raised them as her own.  Debra/D-heart who vanished from class the same time the supple yogi did and to the best of my knowledge neither has been seen since.  Tattooed and pierced practitioners in Chicago, midlifers at a class near my daughter’s college campus, Orange County housewives in Laguna Beach and even the 20- somethings who are trying to lose weight and detox with yoga and are missing it altogether. I bless them all.

My life would not have been the same without yoga. Wanting to bring me this joy, I am certain God closed the dance class at ASU to open the door to my yoga path.

And I will someday get that yoga class done in France, in French.  And at the end, despite the language barrier, I will hear the sound that brings me home.